On November 14, 2013, the U.S. government crushed nearly 6 tons of elephant ivory in a historic demonstration of its commitment to stopping poaching and illegal wildlife trade.  The action by the U.S. Fish and Wildlife Service ushered in a new era in elephant conservation.

Ivory has a long history as a favored raw material for art—jewelry, statuary, piano keys and other decorative purposes.  The commercial market for ivory, however, is the primary reason for the drastic overharvest and near extermination of African elephants during the 20th Century.  In response, the world’s nations together made international ivory trade illegal in 1990.  Elephant populations have been recovering since then, but a new wave of poaching since about 2010 is driving elephant numbers down again—and bringing a renewed sense of urgency to elephant conservation.

As nations catch poachers and disrupt illegal trade, they accumulate ivory.  The ivory is kept in warehouses, generally with no plan for what to do with the stockpiles.  On two occasions, several African nations were allowed to sell their ivory stockpiles, so that the revenue could be used for elephant conservation and to offset agricultural losses caused by elephants trampling peasant’s fields.  Those sales sparked controversy, some feeling that the sales encouraged a black market and further poaching, and world opinion is now deciding against any such future sales of ivory

Kenya made the first commitment to destroying ivory when it burned its stockpile on July 19, 1989.  They burned ivory again in 1991 and 2011, joined by two other countries.  But ivory destruction took hold as a global strategy in 2013, when the Philippines and U.S. destroyed their ivory collections. 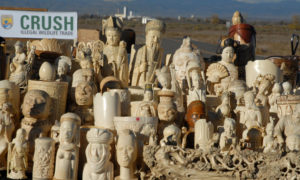 The first U.S. ivory crushing, on November 14, 2013, destroyed the 25-year accumulation held, along with other wildlife contraband, at a US Fish and Wildlife Service warehouse near Denver, Colorado.  An industrial-scale rock crusher, the kind used to grind road demolition waste into gravel, ground elephant tusks, statues and jewelry into pea-sized fragments as the leaders of American conservation looked on.  Carter Roberts, CEO of the World Wildlife Fund, said, “By crushing its contraband ivory tusks and trinkets, the U.S. government sends a signal that it will not tolerate the senseless killing of elephants.”

Other countries got the signal.  Since then, 16 additional countries have crushed or burned their ivory stockpiles, including China, the largest market for illegal ivory sales.  In all, 275 tons of ivory have been destroyed.  Twice more, in 2015 and 2017, the U.S. crushed ivory, both times in Times Square, New York City.  Unfortunately, confiscated ivory continues to accumulate.

Ivory destruction is symbolic, but real actions have followed.  The U.S. made virtually all internal sales of ivory illegal in 2016 (only antique ivory and ivory included on musical instruments are exempted).  China has instituted policies to do the same by 2018.

It is tempting to put a price tag on the value of the destroyed ivory, but that would undermine the whole idea.  As Ross Harvey of the South African Institute of International Affairs wrote, “…ethically, elephant ivory should have no material value, and elephant tusks should only be regarded as valuable on living elephants….crushing a stockpile of confiscated ivory sends a signal to the world that ivory is not for sale.”