People love to look at fish.  Doesn’t matter if it is a 10-gallon tank in one’s bedroom or a museum exhibit the size of a small lake.  The people of San Francisco got their first chance to enjoy fish watching on a grand scale when the Steinhart Aquarium opened its doors on September 29, 1923.

The Steinhart Aquarium is the legacy of two Bavarian immigrants, Sigmund and Ignatz Steinhart.  The brothers got rich during the California gold rush, and they adopted the philanthropic ideal of the time.  At their death, they left $250,000 to “establish a public aquarium in San Francisco second to none in the world…” 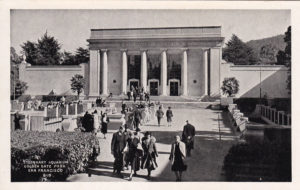 And they succeeded.  When it was opened in 1923 in an elaborate Victorian-style building in Golden Gate Park, it was a wonder.  It contained animals and displays gathered from expeditions around the world.  The tanks were displayed with ornately decorated ironwork, the floors and walls covered in decorative tiles and moldings.  As the aquarium’s popularity grew, so did its ambitions.  The director in the 1950s, Earl Herald, produced a live television show, “Science in Action,” the first of its kind in the nation.  Live animals appeared on the show, doing their best to embarrass the scientists.  An historical video shows three men wrestling an electric eel on a platform where it could be fitted with electrodes to show the electrical charge it produced. When an aquarium trustee discovered an injured and diseased Amazonian manatee for sale in a Brazilian market, he bought it and brought it to the aquarium.  Nursed back to health, it was a mainstay of the aquarium’s exhibits for the “next 14 years, eating 20 heads of lettuce every day.”

The aquarium building was damaged by an earthquake in 1989, and attempts to bring it up to modern standards were eventually abandoned.  In 2005, the building was demolished and replaced by a new, dramatically different structure that opened in 2008.  The new building, which also houses the other divisions of the California Academy of Sciences and cost $500 million to build, is the first and only LEED-platinum certified museum in the world.  It won the Honor Award of the American Society of Landscape Architects in 2009.

The building’s concept was to lift “up a piece of the park and put a building under it.”  The 2.5-acre structure mimics San Francisco’s seven hills with a massive living roof capped by three green living domes.  Holding more than 1.7 million native California plants, the roof and related structures save up to 2 million gallons of runoff per year.  The entire building is surrounded by a canopy that holds 62,000 photovoltaic cells, offsetting 450,000 pounds of greenhouse gas emissions annually.

But what is inside the aquarium remains the reason to visit.  It contains nearly 40,000 living specimens of 900 species.  A Philippine coral reef is 25-feet deep, topped by a mangrove wetland.  A three-level tropical rainforest is home to free-roaming birds, butterflies, amphibians and reptiles.  A colony of African penguins delights young and old.  And, of course, Claude, the albino alligator, remains on the bucket list for all visitors.