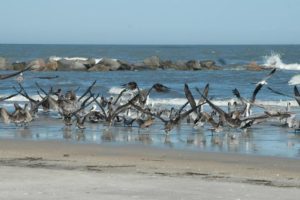 Overall, the park is minimally developed for recreation.  Access is only by boat, and no facilities are provided.  Visitors are limited to 300 per day; annual visitation is less than 100,000.  A significant portion (about 9,000 acres) of the northern part of the island is now a federally designated wilderness area.

The park has three goals—recreation, historic preservation and nature protection.  As with many National Park Service properties, these goals can come into conflict.  That is particularly true for Cumberland Island, with its long history of human habitation and modification.  The biological resources are not unique, but nesting by loggerhead turtles and more than 300 bird species make it a particularly rich biodiversity site.  Hunting to control deer and feral hogs occurs through several specialized hunts (bow-and-arrow, primitive weapons, adult/child) annually.  A total of 87 historic structures remain on the island, but most are ruins.  Private development is proposed regularly for the private lands on the island and sometimes within the park, but little has been done in recent decades.  Hurricane Irma in August 2017 caused sufficient damage that the park was closed for several months.