The codification of a nation’s constitution may seem like an odd entry for a conservation calendar, but Costa Rica made an enormous sustainability decision with one simple eight-word statement—Article 12:  “The Army as a permanent institution is proscribed.”  Instead of funding an army, Costa Rica chose to fund peace and prosperity, creating an educated, healthy and environmentally conscious society.

Costa Rica stands out from other Latin American countries by its stable government and commitment to peace.  That commitment was made law when it passed a new constitution on November 7, 1949.   It was the first nation in the world to make such a decision.

Two other notable parts of the constitution further determined the course of Costa Rica’s future.  The constitution guarantees free education to all citizens.  As a consequence, Costa Rica has a 99% literary rate, among the highest in the world.  Combined with other social programs, Costa Ricans are healthy and happy—the happiest nation in the world, according to several indices.

Regarding the environment, Article 50 of the constitution makes environmental quality explicit:  “All person have the right to a healthy and ecologically balanced environment.”  Article 89 further codifies the Costa Rican commitment “to protect the natural beauties….”

We are fortunate that Costa Rica had the foresight to recognize its exceptional ecological treasures and to conserve those for their own and our benefit.  The country has protected more land—about 25% of the surface area—in parks and other reserves than any country in the world.  Good thing, because Costa Rica holds 6% of the earth’s biodiversity in just 0.03% of the land area.  As a consequence, ecotourism is the country’s largest industry and has reduced poverty in rural areas by 16%.  They are doing well by doing good. 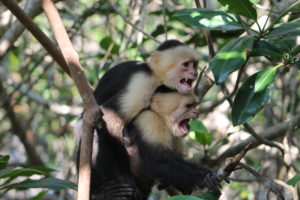 And the world keeps beating a path to Costa Rica’s door.  Nearly 3 million people visited the country in 2016.  Most were from the U.S. (about 40%) and Europe (about 20%).  The average American visit was 11 days, focused almost entirely on the natural wonders of the nation.

Costa Rica’s commitment to sustainability does not end with national parks and ecotourism.  The nation has declared a goal to become the world’s first carbon-neutral state by 2021, the date of its bicentennial (a few other countries are competing for that honor, as well).  Their electricity already is about 98% renewable, mostly from hydro-electric dams, but also from wind, solar and geothermal.  They intend to offset any ongoing emissions from diesel transportation by increasing the area and maturity of forests, which absorb carbon dioxide.  The goal may not be reached, but the intention itself shows the extraordinary commitment of Costa Ricans to approaching a sustainable lifestyle.  As the Costa Rican president said at a sustainability conference in January of 2017, the nation’s decision to become carbon-neutral “was in no way improvised—it’s the constitutional right of the people to enjoy a clean environment.”