“Panda-monium” might be described as a state of excitement generated by the beautiful and exotic Asian animal, the giant panda.  That excitement was fueled for the first time in the U.S. when a live baby panda arrived during 1936.

Reports of the mysterious giant panda had occurred in western culture since the mid-1800s, but only in 1919 did the first complete specimen—a stuffed mount still on exhibit at the American Museum of Natural History—arrive to prove its existence.  A decade later, the sons of Teddy Roosevelt shot a panda on a hunting expedition to China.  But still no live pandas had been seen by the general public.  A rich New York adventurer, Bill Harkness, set out to change that.  He went to China to capture and bring home a giant panda, but died there while waiting for a permit from the government.

His young wife, Ruth, decided to fulfill her husband’s journey.  “I inherited an expedition, and what else could I do?” she later wrote.  With no experience as a world traveler or animal handler, she set out in September, 1936, to bring home a living panda.  She traveled to Shanghai and acquired the services of a dashing 22-year-old Chinese adventurer, Quentin Young; she and Young soon became lovers, adding to the intrigue and romance of the expedition.  With an entourage of 16 bearers and a cook, they trekked through the countryside for six weeks before reaching panda habitat.

On November 9, 1936, they had arrived at the bamboo forest where pandas were know to live.  That day, they heard a shot in the forest and followed the sound.  They discovered an infant panda in the hollow of a tree and, believing that the gunshot had killed the mother, they brought the infant back to their camp.  “Automatically I reached for the tiny thing,” she wrote.  “The warm furriness in my hands brought reality to something that until then had been fantasy.”  They had planned to bring back an adult panda, but Harkness had prepared for this possibility as well, bringing baby bottles, nipples and dried milk on the expedition.  She cared for the panda as if it were a human baby.  They named the panda Su Lin, meaning “a little bit of something precious.”  Su Lin did well, growing steadily on the trip back to Shanghai.

Harkness was first denied permission to export the panda, but she persevered.  For a $20 fee, she received paperwork recording the export “one dog.”  Upon returning to New York, Harkness kept the panda in her apartment; together they were regulars on the society pages of New York newspapers and magazines.  Soon, she gave Su Lin  it to Chicago’s Brookfield Zoo. 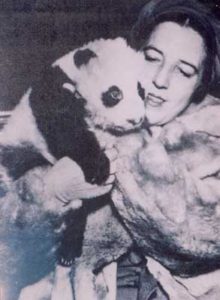 Su Lin became an instant celebrity.  Over the year that the panda lived at the zoo, more than 300,000 people came to see it.  Helen Keller and Al Capone were among Su Lin’s visitors.  Su Lin lived for only a year, but soon other pandas showed up at zoos across America.

By the late 1950s, however, the door to importing pandas slammed shut as the U.S. forbid any purchases from communist China.  By then all pandas at American zoos had died.  The giant panda again arrived in the U.S. as a gift from China’s President Mao Tse-tung when President Richard Nixon visited the country in 1972, beginning the resumption of normal diplomatic relations with the country.

Since then, “panda-monium” has returned.  At zoos across the world, pandas are the main attraction.  The panda is the logo for the World Wildlife Fund.  Panda movies are top box-office draws.  This is all good news for the species.  China has recognized the importance of the animal as a symbol of environmental stewardship and has increased protections, including putting more panda habitat in reserves and reversing deforestation of the panda range.  Consequently, the IUCN recently noted the improved condition of panda populations by moving their status from “endangered” to “vulnerable.”  About 2000 giant pandas now live in the wild in China, all in habitat reserves.