Eliot Furness Porter was born on December 6, 1901 (died1990).  He became one of the most renowned nature photographers of the 20th Century, compared in importance and skill to Ansel Adams, Paul Strand and Alfred Stieglitz.  Educated as a chemical engineer and medical doctor, he taught biochemistry at Harvard and Radcliffe College during the 1930s.

From an early age Porter was fascinated by both nature and photography.  He was given his first camera at the age of ten and immediately began to photograph birds—a subject that became a lifelong obsession.  While teaching college he continued to refine his photographic skills, focusing on the black-and-white palette that defined artistic photography of the times.  In 1938, the influential photographer Alfred Stieglitz offered Porter a one-person show at his New York gallery.  The success of that show convinced Porter to abandon teaching in favor of a career as a professional photographer.  He moved to New Mexico and began to chronicle the southwestern landscape 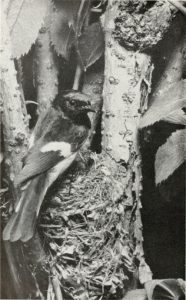 At the time, Kodak was marketing its first popular color film—Kodachrome.  Although color photography was scoffed at by serious photographers, Porter embraced the innovation.  He perfected intricate processes for printing color images.  His use of color ushered in the modern era of photography.  Ansel Adams described Porter as “master of nature’s color.”

Porter also brought a new perspective to the nature photograph.  Rather than the sweeping, majestic landscapes of Ansel Adams, Porter concentrated on the small, the familiar, even the insignificant.   A group of fallen leaves, a collection of pebbles gathered on a sand bar, or the pattern of mineral veining in a rock wall were the kind of subjects he admired and photographed.  He was particularly fond of lichens, the partnership of fungus and algae that colonizes rocks and tree trunks.  “Sometimes,” he said, “you can tell a large story with a tiny subject.”  A critic described his work this way:

“Mr. Porter’s eye is less for the grand sweep than for details of running water, iridescent pools, rock walls, rock textures, caverns, violent twists of sandstone, lichens, willows, leafy trees. He looks for the grand truth in the minute. It is the color that conveys the grandeur. Purples, blues, reds, yellows, oranges — all of them overlaid with metallic brilliance — compose natural beauty of overwhelming vitality.”

He recognized that photography could be used for political purposes, and he put its influence to work on behalf of the burgeoning environmental movement of the 1960s.  “Photography is a strong tool, a propaganda device, and a weapon for the defense of the environment….”  He formed a winning partnership with David Brower, the longtime leader of The Sierra Club.  In 1962, The Sierra Club issued a book of Porter’s photographs accompanying quotes from Henry David Thoreau—In Wildness is the Preservation of the World.  The book was an instant success, a masterpiece of photography, aesthetic design and printing technology; it virtually created the coffee-table book genre.  His second book, displaying photographs of the Glen Canyon taken just before it was flooded by closure of the Glen Canyon Dam, is considered the impetus for passage of The Wilderness Act of 1964.