People who love the outdoors and the prospect of being close to nature often have a strained relationship with polite society and cities.  The modern patron saint of that feeling might well be Edward Abbey, a writer and anarchist who loved the desert and hated what the modern world was doing to it. He described himself this way:

“I have been called a curmudgeon, which my obsolescent dictionary defines as a ‘surly, ill-mannered, bad-tempered fellow’. Nowadays, curmudgeon is likely to refer to anyone who hates hypocrisy, cant, sham, dogmatic ideologies, and has the nerve to point out unpleasant facts and takes the trouble to impale these sins on the skewer of humor and roast them over the fires of fact, common sense, and native intelligence. In this nation of bleating sheep and braying jackasses, it then becomes an honor to be labeled curmudgeon.”

Edward Abbey was born in Indian, Pennsylvania, on January 29, 1927.  He was raised to think for himself—and he took to that education fully.  “Freedom,” he said, “begins between the ears.” He left home at the age of 17, hitchhiking across the country to the desert Southwest, which would be his love and home for most of his life.  Before then, however, he was drafted into the Army and spent two years in Italy as a military policeman—an experience that turned him into an anarchist.  He returned to the U.S. and received two degrees from the University of New Mexico. 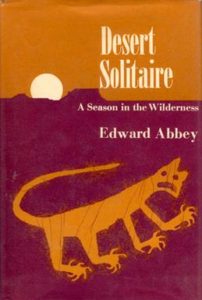 He then embarked on a 15-year career as a part-time employee in various national parks and monuments, immersing himself in the desert environment that obsessed him.  He began writing, first novels, but then, in 1968, the book that first made him famous, Desert Solitaire.  Desert Solitaire is a rambling defense of the qualities of the desert, set in what is now Arches National Park, and the need to let it be what it is—just desert, not developed into cities, not irrigated into farmland, but just desert.  He wrote, “Wilderness is not a luxury but a necessity of the human spirit, and as vital to our lives as water and good bread. A civilization which destroys what little remains of the wild, the spare, the original, is cutting itself off from its origins and betraying the principle of civilization itself.” 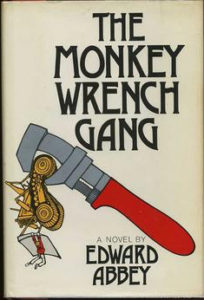 But it was another book, published in 1975, that earned him a place as a hero to some and a menace to others. His novel, The Monkey Wrench Gang, described the fictional exploits of environmental extremists who used disruptive strategies to stop development—the idea of tossing a wrench into the gears.  I doubt that Abbey himself ever engaged in direct sabotage of any development—he was too focused on his own life and experiences—but the idea of guerilla warfare in support of the environment was adopted by some groups, with Edward Abbey as their spiritual guide.

Abbey was the true anti-hero.  He was married and divorced four times, a known philanderer.  He drank excessively and threw his beer cans out the truck window because the highway had already destroyed the lands through which it passed.  He took his television outside and shot it.  Trying to pin down his philosophy was as difficult as finding standing water in the desert, a purposeful complexity.  “What do I believe in?” he wrote.  “I believe in sun.  In rock.  In the dogma of the sun and the doctrine of the rock.  I believe in blood, fire, woman, rivers, eagles, storm, drums, flutes, banjos, and broom-tailed horses….”

And when the end came, on March 14, 1989, he finished things the way he wanted.  As agreed earlier, friends wrapped him in a sleeping bag and drove him out into the desert, iced down for the journey.  They buried him, un-embalmed, at an unknown and unmarked site in the desert—an illegal act—completing his desire to become fertilizer for whatever the desert wished to grow from his remains.