One of history’s most controversial films was released on August 21, 1942—Bambi.  How could an animated film about a white-tailed deer cause such furor?  How could discussion of the film become an industry in itself?  No doubt, it underlies our universal dilemma of both using and protecting nature simultaneously.

Bambi is a product of Walt Disney, the founder and long-time leader of one of the most successful entertainment companies in the world.  Disney began making full-length animated films in the late 1930s.  Bambi was supposed to be Disney’s second release, with production beginning in 1936, but it took so long to make that it became fifth, finally getting to theaters in 1942.  Disney wanted the film to be accurate and look good.  He sent artists to the Maine woods to sketch forest backgrounds for six months.  He received two white-tail fawns that artists used to model their drawings of body form and movements.  He required artists to work in oil rather than watercolor to make the scenes more vivid, slowing the work to a snail’s pace.  Getting the spots to move correctly on Bambi’s coat and making his father’s antlers look correct in all orientations presented particular obstacles. 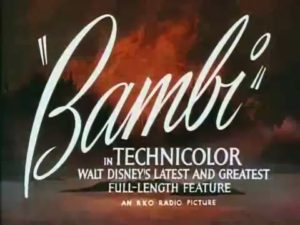 The idea for the film was not original to Walt Disney, however.  It was based on a 1928 book, Bambi: A Life in the Woods, by Austrian author, journalists and critic Siegmun Salzmann (writing under the pseudonym Felix Salten).  Considered by many to be a metaphor for the treatment of Jews by the fascists, the book (and all of Salzmann’s work) was eventually outlawed in Nazi Germany.  Salzmann’s book, written for adults, describes the life journey of a male roe deer in a forest beset with dangers from humans and other animals.

Disney, as we all know, deviated from that script. He set the book in the United States, with the main character a white-tailed deer. In Disney’s Bambi, the animals are all friends, cavorting happily in the forest, sometimes hungry but usually enjoying the good life.  Until humans interrupts the utopia.  The warning cry goes up among the animals, “Man is in the forest.” Hunters kill Bambi’s mother (although that happens out of sight), then they go after other deer, including injuring Bambi, and accidentally setting the forest on fire.  Except for the death of Bambi’s mother, however, the rest turns out well, with Bambi becoming the new prince of the forest and siring a new generation of deer with Faline.

Reactions to Bambi were immediate and extreme.  Hunters immediately saw the film as anit-hunting, an Outdoor Life editor saying it was “the worst insult ever offered in any form to American sportsmen.”  The magazine tried to get Disney to include an introduction explaining that the film was a fantasy, not representative of ethical hunters.  A writer for Audubon, however, praised the film for raising the environmental consciousness of the general population, comparing it to the impact of Uncle Tom’s Cabin on views of slavery.  And the controversy and rhetoric have never cooled off, with terms like the Bambi effect, Bambi factor, Bambi Syndrome and Bambi backlash still firing up admirers and haters.  In 1980, George Regier wrote in Field & Stream that “Naturally once Bambi is raised in status from mere deer to Jesus Whitetail Superstar, man’s hunting of deer becomes a crime comparable to the persecution of Christ.”

The film itself is one of the most successful in Disney’s catalogue of animated features.  At first it lost money, but re-releases over time have filled the Disney treasury.  Gross proceeds from the film are around $300 million worldwide, not counting a long list of commercial spinoffs.  The American Film Institute considers it among the top ten animated features of all time.

So, we can either blame Bambi for making a sentimental mess of our approach to managing natural resources, or we can thank Bambi for being one among many Disney messages cautioning us to pay attention to how we treat the natural world.  Take your choice.  But you have to agree that Thumper is one cute rabbit!