In its fourth year of operation, UNESCO (United Nations Educational, Scientific and Cultural Organization) declared 26 additional properties to the World Heritage List at its annual meeting, ending on October 30, 1981.  The World Heritage Committee met in Sydney, Australia during October 26-30.  Among the 26 new properties were 17 in the cultural category and 9 in the natural category.  The new additions raised the total list to 112 properties.

While all these properties are exceptional, now is an appropriate time to highlight Serengeti National Park in Tanzania.  According to UNESCO, “The Serengeti plains harbour the largest remaining unaltered animal migration in the world where over one million wildebeest plus hundreds of thousands of other ungulates engage in a 1,000 km long annual circular trek spanning the two adjacent countries of Kenya and Tanzania.”

And it is at this time of year—September and October—that the annual migration of mammals reaches the northernmost areas of the park, resulting in a concentration of animals unknown anywhere else in the world.  Wildebeest, zebras and Thompson’s gazelles migrate in a clockwise rotation that takes them from southern areas of the Serengeti region during the wet season to the north, along the Tanzania-Kenya border, during the dry season.  The northern area, bisected by the permanently flowing Mara River, provides a refuge of nutritious grasses and plentiful water.  Daily, herds of wildebeest cross back and forth across the Mara River in spectacular masses that attract wildlife observers from around the globe.  The crossing provide opportunities for crocodiles to prey on wildebeest and other predators and scavengers to  pick up the leftovers.

Serengeti National Park and adjacent protected areas (like Maasai Mara National Reserve in Kenya and Ngorongoro Crater Conservation Area, both also on the UNESCO Heritage List) provide an intact ecosystem supporting the huge mammal populations and the stunning migration.  Altogether, the ecosystem covers about 3.4 million acres, about the size of Yosemite and Yellowstone National Parks combined.

UNESCO states that “volcanic soils combined with the ecological impact of the migration results in one of the most productive ecosystems on earth, sustaining the largest number of ungulates and the highest concentration of large predators in the world.”  The region is home to 2 million wildebeest (about 1.2 million are migratory), nearly 1 million Thompson’s gazelles and 300,000 zebras.  The predator population includes 4,000 lions, 1,000 leopards, 225 cheetahs, 3,500 spotted hyenas and 300 wild dogs. 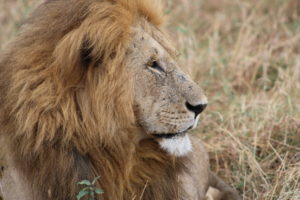 A male lion, one of thousands in the Serengeti (photo by Larry Nielsen)

Although most of the Serengeti region, including the Serengeti National Park, is protected, threats to the integrity of the area and the world-famous migration continue.  A recent plan to build a road across Serengeti National Park would have divided the northern zone of the park in two, effectively stopping the migration as we know it.  The road has been placed on hold, but population pressures around the park and economic needs to move people and cargo between Lake Victoria and the Indian Ocean will only increase in the future.

The recognition and protection provided by UNESCO designation on the World Heritage List, therefore, are powerful forces in the battle to preserve the ecosystem and its migration.  UNESCO designation provides evidence that the entire world considers a piece of land, water or human structure part of its heritage and not in the sole jurisdiction of a particular country.