The science of limnology—the study of freshwater lakes and rivers—is synonymous with the name of Edward Asahel Birge, born on September 7, 1851 (died 1950).  Along with his colleague, Chancey Juday, the pair are considered among the founders of freshwater science throughout the world. 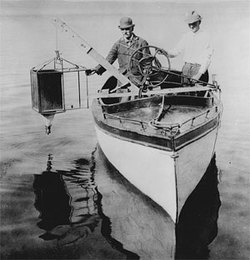 Birge was born in New York and received Bachelors and Master’s degrees from Williams College before beginning a doctoral program at Harvard, under the naturalist legend Louis Agassiz.  He was lured to the University of Wisconsin as a biology instructor in 1875, before he finished his doctorate; eventually he finished and was made a full professor in 1879.

From his laboratory on Wisconsin’s campus on the shore of Lake Mendota, Birge studied microscopic animals called Cladocerans.  He observed their distribution in the water column, from the surface to the bottom, noting layers in which Cladocea were abundant and absent.  That work led to the discovery of thermal layering in freshwater lakes, with warm water on top in the summer, underlain by a zone of rapidly changing temperature (now called a thermocline) and cold water on the bottom; in the winter, this pattern reversed.  Birge recognized that understanding lakes required more than biological expertise, and he combed the University of Wisconsin to develop a team of chemists, physicists and geologists to study Lake Mendota, which became the most researched lake in the world at the time.  And in so doing, he established the science of limnology.

Birge was also a highly regarded and capable administrator.  He rose through the ranks of university administration, twice serving as President of the University of Wisconsin.  Along the way, he also was Wisconsin’s  Fisheries Commissioner and the long-time director of the Wisconsin Geological and Natural History Survey.  As university president in 1921, he was drawn into public controversy by arguing against the anti-evolution views of William Jennings Bryan.

But it is Ed Birge in a boat, nice weather or nasty, tossing and retrieving sampling gear, that is the essence of his legacy.  One of his students, Robert Pennak (who himself became the nation’s foremost aquatic entomologist) told what it was like to work with Birge:

“After a Model A car we were using had been turned on its side by slippery road conditions, Birge’s comment was ‘…dammit Pennak, put it back on its wheels, the survey must go on!’  We went out in all kinds of weather.  If it rained that day, it didn’t make any difference, you went out anyway.  If it was windy, you went out anyway.  We used these heavy old oak boats in those days.  There were no life preservers…. We never gave it a thought and worked along blissfully.”