Most historians consider the completion of the transcontinental railroad in 1869 to be the end of the frontier era in America.  The country had become tied together coast-to-coast, with citizens able to travel in relative ease and safety across the nation in a short time.  A similar event—the dedication of the Lincoln Highway—occurred on October 31, 1913, paving the way for reliable automobile travel and ushering in the American love affair with cars.

The automobile was gaining popularity and reliability in the early 1900s, but travel was restricted primarily to local use.  The cause?  Bad roads, or no roads, extending for long distances.  Carl G. Fisher, an Indianapolis entrepreneur and car enthusiast, understood the problem:  “The automobile won’t get anywhere until it has good roads to run on.”  And he had a solution:  Establish a roadway from New York City to San Francisco that would be paved from end to end.  And to give it an All-American flavor, name that road the “Lincoln Highway” after the nation’s most popular president.

Fisher formed the Lincoln Highway Association and began the work of raising friends and funds.  His idea was to build the road with private money, but that soon gave way to using private funds for marketing and encouraging local and state governments and civic groups to pay the construction costs.  The next task was to pick a route.  Fisher and his friends set out on a “Trail-Blazer” tour in the summer of 1913, crisscrossing the country for 34 days.  They were greeted everywhere as celebrities by local dignitaries hoping the road would pass through their communities.

The chosen route was 3,389 miles long, following a hodge-podge of historical pathways once used by Native Americans, westward pioneers, the Pony Express and others.  When the route was announced and the highway dedicated on October 31, 1913, cities along the route held celebrations with bonfires, fireworks, parades and speeches.

Gradually—very gradually—the goal of paving the entire length of the route gained ground and a “highway” emerged.  By the time of the road’s formal opening in 1928, all but 42 miles of the route had been paved, and that section was under construction.  Eventually, the highway received the designation as U.S. Route 30 along most of its length, and the name Lincoln Highway fell out of use.  For those of us who grew up in and around Chicago, the radio ads for “the beautiful U.S. 30 Dragstrip” were a constant reminder of the importance of the route.

As a symbol and, perhaps, driver of American car culture, the Lincoln Highway’s start provides a useful milepost.  When the project began, the U.S. had 190,000 miles of paved roads (that is, covered with something other than dirt); today, the country has 2.7 million paved miles, a 14-fold increase.  In 1913, the U.S. had 13 vehicles per 1000 people; today, the country has 830 vehicles per 1000 people, a 64-fold increase.  The U.S. has more vehicles per capita than any country in the world, except Monaco (go figure…).  With 4.5% of the world’s population, the U.S. consumes 20.7% of the world’s petroleum, a rate nearly 5 times the average for the rest of the world.  We do love our cars! 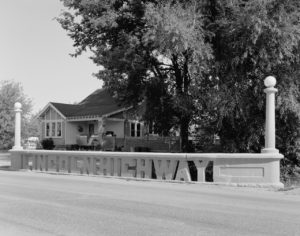 When my wife and I visit her hometown in central Illinois, we sometimes drive the back roads along what is known as the “Lincoln Heritage Trail.”  Signs resembling the Lincoln penny mark the routes that Lincoln traversed through Kentucky, Indiana and Illinois.  I wonder what Lincoln would think about our addiction to cars and travel today.

Two of Lincoln’s quotes seem apropos.  First, he said, “I walk slowly, but I never walk backward.”  Undoubtedly, Lincoln would envy our ability to get around efficiently, comfortably and quickly.  He would probably also encourage us sometimes to move a little more slowly, to smell those roses, to take the back roads.

Second, he said, “The best way to predict the future is to create it.”  Undoubtedly, Lincoln would also admire the ingenuity and capability of the American people to invent a transportation system so remarkable.  But, he would also drive us not to rest on our past accomplishments, but aim for a better future.  He’d worry over issues of climate change caused by gas-burning vehicles, habitat losses to road building and the stresses and inefficiency of traffic congestion.

Today, I’m sure, he would tell us that the future we should be creating is a future of sustainable, carbon-neutral transportation.