Jay Norwood “Ding” Darling was born on October 21, 1876 (died 1962).  Darling became one of the nation’s foremost editorial cartoonists, but his real love was for conservation.  He became known as “the best friend a duck ever had.”

Darling was raised on the edge of the Iowa prairie frontier, learning to ride, shoot and love nature as a boy.  He witnessed first-hand, throughout his life, the changes that occurred as the growing U.S. population pushed West, often converting the naturally productive landscape into a wasteland.  Reversing that trend would be a life-long passion.

But Darling had another passion and talent—he could draw, with meaning and humor.  That talent often landed him in hot water—he was tossed from college for drawing unflattering pictures of the university’s president. But it also led to a career as an editorial cartoonist, working for most of a half-century for the Des Moines Register.  In those days, the editorial cartoons often appeared on the front page of the newspaper, making Darling’s contributions one of the first things readers saw when they picked up the paper.  His prominence grew steadily, with his cartoons eventually gracing more than 100 papers across the nation and earning two Pulitzer Prizes. 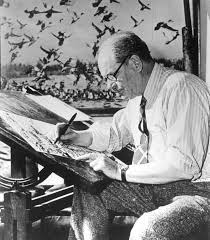 But he was also a conservationist, and he used his editorial privilege to bring that message to the front pages of the nation’s newspapers as well.  He was particularly concerned about soils, wetlands and the animals they produced—ducks.  Because of land clearing and draining for row crops, the wetlands where waterfowl reproduced were disappearing.  And because of excess hunting, ducks were in double jeopardy.

Always willing to “speak truth to power,” he made himself such a nuisance to President Franklin Roosevelt complaining about the woeful condition of wildlife that the president finally called him into Washington to run the U.S. Biological Survey (now the Fish and Wildlife Service).  Despite his dislike of Roosevelt and most of his policies, Darling accepted the position as his duty to conservation.  In a short 20 months, Darling brought new life and professionalism to the agency.  From a few ignored properties, he made the National Wildlife Refuge System into the powerful conservation tool it is today.

He is most famous for his development of the Duck Stamp program.  Passed just as Darling was coming to Washington, the Duck Stamp Act required that all hunters of migratory waterfowl purchase an annual “stamp.”  The first stamps, issued in 1935, cost one dollar; today the stamp costs $25.  Darling drew the picture of two mallard ducks landing in a marsh that appeared on the first stamp.  Today, an annual art contest decides the image to appear on the stamp.  The Duck Stamp program is one of the most successful conservation funding ideas in history.  It has generated nearly $1 billion for buying and improving wildlife refuges, using an amazing 96 cents of every dollar for direct conservation work.  The concept has been copied in many nations around the world, in all U.S. states and for various other forms of wildlife.

Darling went on to found the organization that has become the National Wildlife Federation.  He believed that education was the most important tool for conservation—so much so that he personally co-funded the first Cooperative Wildlife Research Unit at Iowa State University.  Today more than fifty similar units operate at universities across the United States.