Salim Moizuddin Abdul Ali was an Indian conservationist born on November 12, 1896 (died 1987).  Ali became one of the world’s foremost ornithologists, earning the moniker “The Birdman of India.”

Ali was born in Mumbai (formerly Bombay), the youngest of nine siblings.  As a boy of ten, he shot a bird with an air gun.  He realized it wasn’t a common House Sparrow and asked his uncle to help identify the bird.  His uncle took him to the director of the Bombay Natural History Society, who identified it as a Yellow-throated Sparrow and showed the young Ali around the museum.  Ali was hooked—he became a regular at the museum and from then on birds were central to his life. 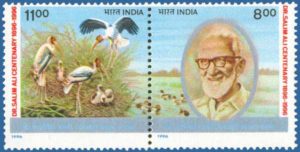 He was educated for business, however, and moved to Burma for several years to help develop his family’s tungsten mines.  He chose that assignment on purpose:  “I took the opportunity in Burma where the mining business was all in thick forest….That part of the country…was particularly good for birds.”

His interest in ornithology took him on a rambling life journey.  He studied zoology, but never completed a degree.  He was a guide and lecturer at a new Prince of Wales Museum in Mumbai.  He traveled to Germany for two years to study birds and learn bird-banding.  He spent some years in a coastal community where he studied the nesting habits of weaverbirds—a topic that he later said was his most rewarding—and rediscovered a species of weaverbird thought extinct.

As his reputation as an ornithologist grew, he received opportunities to survey bird populations and behavior in many regions of India.  This was heaven to him.  Never a fan of taxonomy and nomenclature, he thrived on the observation of living birds in nature.  “I feel strongly like retiring from ornithology, if this is the stuff, and spending the rest of my days in the peace of the wilderness with birds, and away from the dust and frenzy of taxonomical warfare.”

He did not retire from ornithology, but made it his own.  Among many publications, he produced two seminal works.  First was The Book of Indian Birds, a popular book that raised interest in the observation and conservation of birds.  Second was the authoritative 10-volume Handbook of the Birds of India and Pakistan, which he co-authored with S. Dillon Ripley, who would go on to become the Secretary of the Smithsonian Institution.

Ali became one of India’s most prominent conservationists.  He consulted with the governments of Jawaharlal Nehru, convincing him to continue support of the Bombay Natural History Society, and Indira Gandhi, who made him an Elder of the government.  He fought successfully for the protection of the Bharatpur Bird Sanctuary and Silent Valley National Park.

For his ninety years of dedication to conservation, Ali was honored with the highest recognitions from around the world.  He received both the second and third highest civilian awards in India, and was the first foreigner to receive the Gold Medal of the British Ornithologists’ Union.  He was honored by the Soviet Union, the United States, the Netherlands and the IUCN.  Several bird species, bird sanctuaries and institutions are named after him.

Yet neither awards nor reputation motivated him.  Birds did.  A short film of his life ended this way:  “In the autumn of his life, yet young at heart, Salim Ali is out all the time, walking, looking, listening.  In the company of birds, he is never lonely….for to be with birds is very heaven.”