On January 1, 1970, President Richard Nixon signed into law the National Environmental Policy Act, now known universally by its acronym—NEPA.  NEPA is considered Magna Carta for the  environment in the United States.

NEPA is a remarkably short law—only 7 pages—considering the major impact that it has had on government actions.  When passed, the law accomplished three things.  First, it established “a national policy which will encourage productive and enjoyable harmony between man and his environment.”  Second, it established a Council on Environmental Quality in the White House to oversee all environmental matters; this was intended to be the major action item in the law.  Third, it required every significant government action to be accompanied by a statement of the impacts of that action; in practice, this has turned out to be the overwhelmingly most significant part of the law.

The law was the brainchild of Senator Henry “Scoop” Jackson, a Democrat from the state of Washington.  Jackson served in Congress for 43 years, first in the House of Representatives and later in the Senate.  During the 1960s, Jackson joined with others in the developing environmental movement.  Distressed particularly over conflicting government actions in the Everglades—Interior trying to protect the area as a national park while the Army Corps of Engineers tried to drain it—Jackson decided the nation needed a formal declaration of its intent to protect the environment and a mechanism to make sure government projects weren’t working at cross purposes.  The Council on Environmental Quality was to perform that role.

When first proposed in Congress, Jackson’s act did not include the idea of environmental impact statements.  But after passing with almost unanimous consent in both houses, the reconciliation process added the requirement for reviewing every major action for its environmental consequences.  Later observers have suggested that the act would never have passed had Jackson or other legislators understood what the environmental impact statement would become.  Nonetheless, it passed overwhelmingly. 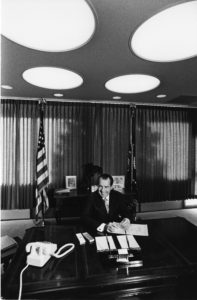 President Nixon signed the bill with great fanfare.  He noted on signing that it was “particularly fitting that my first official act in this new decade is to approve the National Environmental Policy Act.”  Casting the law as an anti-pollution measure, Nixon said, “The 1970s must absolutely be the years when America pays its debt to the past by reclaiming the purity of its air, its waters and our living environment.  It is literally now or never.”

Indeed, the time was now.  NEPA had immediate far-ranging impacts.  It spawned a series of environmental organizations, like the Environmental Defense Fund and the Natural Resources Defense Council, that began to sue the government for its failure to comply with the law.  These lawsuits established that environmental impact statements needed to be serious, comprehensive and expertly performed analyses, not back-of-the-envelope bureaucratic paperwork.  Consequently, hundreds of federal projects in the initial years were stopped or stalled.  The Army Corps of Engineers estimated that in the first five years of NEPA, 350 of its projects had been stopped, delayed or changed because of the law.  Today, of course, federal agencies take environmental impacts seriously, and have incorporated them as core elements of their planning.

Initially, the Council on Environmental Quality (CEQ) also played a major role in establishing and directing federal environmental policy.  The large series of environmental laws passed during the 1970s were often led by the CEQ.  Since then, however, as new agencies, programs and staffs were established to implement those laws (notably the Environmental Protection Agency itself), the CEQ has become peripheral to the nation’s overall environmental programming.