James Bond was born on January 4, 1900, in Philadelphia (died in 1989). He later moved to England with his father and studied at Trinity College, Cambridge University.  Returning to Philadelphia, he soon gave up a career in banking to focus on his first love—natural history.  He followed in his father’s footsteps by sailing on a collecting expedition to the lower Amazon River in 1925 on behalf of the Academy of Natural Sciences of Philadelphia.  Now completely hooked, he became a volunteer curator there—one of “the last of a traditional museum breed, the independently wealthy, non-salaried curator, who lacked advanced university degrees.” 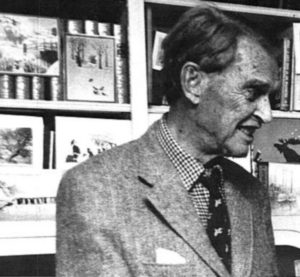 Bond was intrigued especially with the bird fauna of the Caribbean.  He explored more than 100 Caribbean islands during his career.  His most influential work is the definitive guide to the birds of the region, first published in 1936 as The Birds of the West Indies. Bond is credited with discovering that the birds of the Caribbean are related to those of North America, not South America, as had been previously assumed.  He also published books about the birds of Maine and Bolivia, along with dozens of other scientific papers.  Bond received many honors and awards for his work, including the Brewster Medal in 1954, the highest honor of the American Ornithologists’ Union.

But it was The Birds of the West Indies that earned him fame as the namesake for the world’s favorite spy.  Ian Fleming, the creator of the fictional James Bond, spent months at a time at his Jamaican home (Goldeneye) and was an amateur bird-watcher.  When he was writing his first spy novel, Casino Royale, in 1952, he was casting around for a name for the hero that would be unremarkable.  Fleming later wrote:

“I was determined that my secret agent should be as anonymous as possible….At that time one of my bibles was, and still is, Birds of the West Indies by James Bond, and it struck me that this name, brief, unromantic and yet very masculine, was just what I needed and so James Bond II was born…”

The real James Bond—JB authenticus, as his wife referred to him—wasn’t amused by the appropriation of his name.  He never played up the connection, even when offered $100 to land in a helicopter on the roof of a movie theater.  Ian Fleming appreciated the couple, however, and, at their only meeting, gave them a pre-publication copy of his novel, You Only Live Twice, inscribed “To the real James Bond, from the Thief of his identity, Ian Fleming, Feb. 5, 1964—a great day!”  That book sold recently at auction for $84,000.

Next time you watch the Bond film, Die Another Day, pay attention to the early scenes.  As usual, Bond is pretending to be something other than a spy.  This time, he claims to be an ornithologist and holds a copy of The Birds of the West Indies.