The most successful wildlife television series in history, Wild Kingdom, first aired on Sunday, January 6, 1963.  Anyone interested in animals and nature growing up in the 1960s and 1970s watched faithfully each week as host Marlin Perkins and naturalist Jim Fowler traversed the world exploring the lives of wild creatures—and usually ending up wrestling with them in the water, chasing them up trees, or wallowing with them in mud holes. 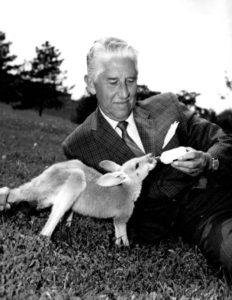 Insurance company Mutual of Omaha sponsored the program from the beginning and throughout its run.  The program ran for 22 years, from 1963 through 1985, producing hundreds of original episodes.    It aired first on Sunday evenings on NBC and later on syndication. The show’s legacy continues in various media formats, including a web series.

The show’s originator and its long-time host was Marlin Perkins.  Perkins came to the show with national prominence as a zoo professional, having served as Director of the Buffalo Zoo, Chicago’s Lincoln Park Zoo and the St. Louis Zoo.  Marlin’s main sidekick on the show, and his successor as host, was Jim Fowler—the person who generally ended up in the water, trees or mud.  Along with his appearance on Wild Kingdom, Fowler became a national celebrity through more than 100 appearances—with animals—on the Tonight Show with Johnny Carson.  Fowler continues to represent Mutual of Omaha and Wild Kingdom as an animal and environmental advocate.

The show owed its popularity to a combination of factors.  The grandfatherly Perkins narrated with a gentle demeanor, while the mountain-sized Fowler dove into action, often dangerous, with an array of beautiful wild creatures.  The shows brought exotic locales and animals into viewers’ homes at a time when such programming did not exist.  Wild Kingdom was the perfect family-friendly program.

But the show did more—it brought the need for conservation of nature into our living rooms, just as the nation’s environmental conscience was awakening.  As Fowler reflected later, “….you don’t often see a spokesman for the natural world….The biggest challenge is how to affect public attitudes and make people care.”   Wild Kingdom did just that.  It was nominated for more than 40 broadcast awards, winning 4 Emmys.  Many consider Wild Kingdom to be the precursor and inspiration for the entire networks, like Animal Planet, that are so popular today.