The great 19th Century naturalist Alfred Russel Wallace was born on January 8, 1823 (died 1913).  Today, Wallace is known mostly as a footnote—the other originator of the idea of evolution and natural selection, aside the much more famous Charles Darwin.  His prolific career as a naturalist and social commentator, however, made Wallace one of the most famous and honored men of England during his life.

Wallace was born to a working-class family in Gwent, Wales, and was forced to quit school at age 14 to take up work with his brother as a surveyor.  As they roamed southern England and Wales surveying, Wallace took an interest in the landscapes they charted.  He bought a book about botany and began to identify the plants along his surveying transects.  A naturalist was born!  When the surveying business went bust, he joined a local school as a drafting teacher.  His interest expanded to beetles, and he never looked back.

With a fellow teacher, he left for a multiple-year expedition to Brazil in 1848, at the age of 25.  There, he collected specimens of all kinds, with the goal of selling them to collectors back home.  After four years in Brazil, he boarded a ship along with his treasure of new and exotic specimens and many live animals.  A few days out from port, the ship caught fire and sank.  Along with it sank Wallace’s specimens and fortune.  The survivors floated in leaky lifeboats for ten days before being rescued.

Undaunted, Wallace started a second major expedition in 1854, this time to what we now call Indonesia.  Collecting was again his agenda, but this time he also planned to investigate an idea that had captured his thinking—evolution.  He spent a total of eight years exploring the region, collecting and sending home more than 125,000 specimens and in the process discovering 1000 new species. His most spectacular find was the golden birdwing butterfly; he described the moment he found it:

“None but a naturalist can understand the intense excitement I experienced when I at length captured it.  On taking it out of my net and opening the glorious wings, my heart began to beat, violently, the blood rushed to my head, and I felt much more like fainting than I have done when in apprehension of immediate death”

His subsequent book, The Malay Archipelago, was considered the foremost scientific travel book of the period and remains in print today.

While in Indonesia, he began writing extensively about his collections and ideas, including sending his thoughts about evolution to leading scientists in England.  When Charles Darwin saw Wallace’s work, Darwin rushed to finish his own writing on evolution.  Together they published a paper on the subject in August of 1858, thereby rightfully establishing Wallace as the co-creator of the theory of natural selection.  Darwin, however, gets the lion’s share of the credit for these ideas, while Wallace’s stature has continued to shrink.

At the time, however, Wallace was widely acknowledged for his work and became a more famous figure than Darwin.  Wallace wrote more than 1000 papers and 22 books during his life, many about the natural world, but others branching into realms of social reform and politics. 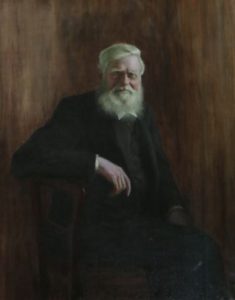 The plight of the two figures—Darwin and Wallace—is in evidence today in the London Museum of Natural History.  A marble sculpture of Darwin sits atop the grand staircase leading to the upper floors of the museum; Wallace, however, merits only a portrait on the adjacent wall, hung there many decades after Darwin’s statue.  In compensation, perhaps, a relatively new bronze statue of Wallace graces a gallery on the second floor.  The statue depicts a moment on his collecting expedition to the Malay, and his gaze extends to the ceiling of the cathedral-like central hall of the museum.  Follow his gaze, and you will see a golden birdwing butterfly painted on the distant ceiling.