We either love it or hate it.  But either way, we have to admit that statistics is one of the most powerful tools for conservation and environmental science.  The foundation of statistics as we know it today comes largely from the incredible brain of Sir Ronald Aylmer Fischer, born on February 17, 1890 (died 1962).

Fischer was born in London and educated at Cambridge.  He studied physics and biology, but plagued by terrible eyesight, he decided that mathematics was the way he could serve the biological sciences best.  He was such a brilliant mathematician that he generally just read a problem and produced the right answer, much to the displeasure of his teachers. After graduating, he worked for several years as a school teacher, a job he disliked but paid for his daily needs.  While teaching, he published a paper that unified the ideas of Charles Darwin and Gregor Mendel, showing how genetic variation in populations produced the basis for natural selection. 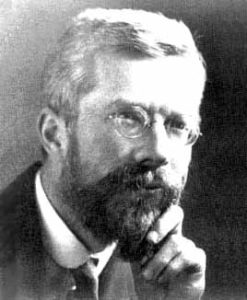 He began working at the Rothamsted Experiment Station in 1920, performing statistical analysis of agricultural experiments.  This is where and when his contributions as a statistician took off.  He developed the basics of experimental design, famously saying that “To consult the statistician after an experiment is finished is often merely to ask him to conduct a post mortem examination. He can perhaps say what the experiment died of.”  (and that is why we always have to consult a statistician before we conduct an experiment today!)

He developed  many of the concepts still used in today’s statistical analyses.  He invented analysis of variance, the tool that lets multiple factors be tested in a single experiment.  He also set the standard probability of error at 0.05, still considered the level of certainty needed to accept the results of an experiment.  He wrote several textbooks that became the foundation of modern statistical theory and practice.  Because of his understanding of the variations in populations, he is acknowledged as one of the pioneers of population genetics.

The importance of Fischer’s approach to statistical analysis is profound for conservation.  While statistics is not really needed in physical sciences (gravity always acts the same way), it is in biological sciences because living organisms and complex environments vary in many dimensions beyond those being tested.  Consequently, in order to judge whether the results we see—the impact of a pollutant, the importance of a habitat feature, whether a set of specimens are one species or two—are real, statistical tests are essential.

So, as much as we hate thinking about statistics, performing the tests and interpreting the results according to rigorous standards, that is what transforms conservation from advocacy to science.  Three cheers for R. A. Fischer and for the statistics he burdened us with!